In this series of posts, I’m going to cover my views on software testing. I’ve spent a lot of time recently re-factoring some fairly large test suites, and would like to share some best practices I’ve learned a long the way.

In this first post, I’d like to cover some high-level testing strategies and my philosophy towards testing. In subsequent posts, I’m going to dive deeper into testing in each part of the stack.

No conversation about testing is complete without talking about the test pyramid: 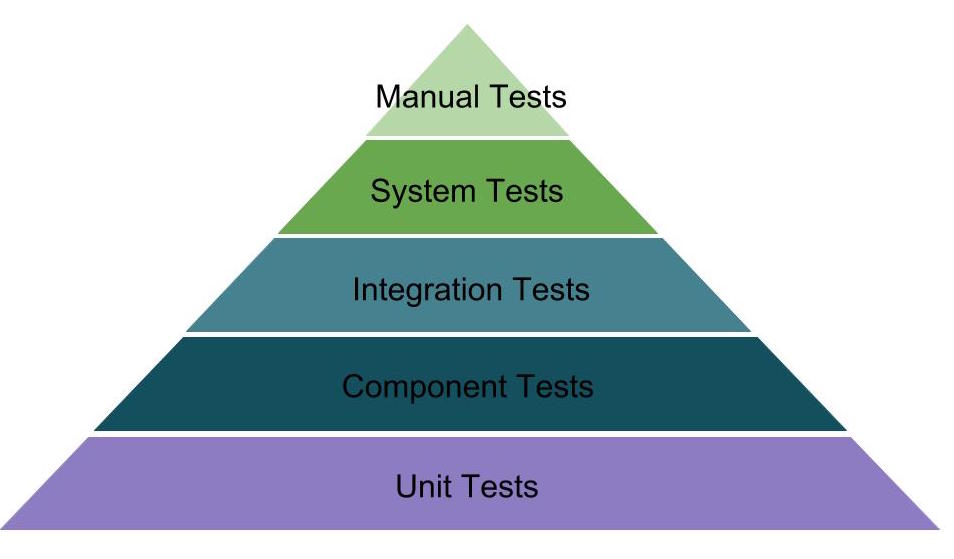 The test pyramid should guide your approach to writing tests. It shows you where to focus your time. The most important takeaways from the diagram are:

In terms of the types of tests at each level of the pyramid there are different opinions of what each type encompasses. Let me summarize my definitions. I will delve deeper into these definitions in future posts.

The test pyramid is instructive, but I think it’s often misunderstood. The pyramid is best used as a guide for order of preference. Basically, you should seek to cover a test case starting at the lowest applicable level of the pyramid.

For example while it is more desirable to cover a particular test case at the unit test level it’s not always possible or applicable. If you can write a meaningful unit test, do so — but only if it actually fits the unit test definition. Otherwise you risk ending up with a slow unit test that doesn’t add much value, or worse – fools you into thinking a particular case is adequately tested.

Another diagram which I think more accurately reflects many real-world projects is what is sometimes called the Test Diamond:

Many projects are web-based apps. They typically talk to a database, index data in a full-text search, have API’s, and probably some back-end infrastructure to run jobs asynchronously. In these types of projects, relative to the whole code-base, there probably isn’t going to be a lot of algorithmic code. It’s mostly putting components together with small pockets of tricky logic, and lots of configuration wiring everything together.

In this type of application, the diamond makes much more sense. Sure, you’ll have some unit tests, but your bread and butter tests will be integration tests. I’ll have much more to say about integration tests in part 2 of this series.

So you agree, testing is important. You and your team are all jazzed up about writing tests! Over time, you will probably end up with lots of them. This can be good, or bad.

One thing that helps wrangle a massive test suite is defining a critical subcategory of your tests. In particular for the slower categories of tests, (integration and above) critical tests are great at helping provide faster feedback on critical functionality and systemic problems3. The definition of critical depends on your organization, but would commonly include the following:

That’s it for this introductory post. Stay tuned for the next part in the series, where I’ll be diving into unit and integration testing.

1 For example, how good is the logging and monitoring on your test system? It typically lacks the robustness of a production system.

3 For example, something that causes all your tests to fail, like a global javascript error, or build environment problem.